First off, thanks for 300 views this past month! That blows my mind. I hope you enjoy the post, and thanks for reading!

Hike through any forest on the East Coast of the US today, and you’re bound to come across those small, fast sciurids we call chipmunks. Back during the Pleistocene, however, chipmunks grew to much larger sizes, as evinced by the giant, or “noblest” chipmunk, Tamias aristus. The modern eastern chipmunk, Tamias striatus, has been found to be T. aristus‘s closest relative (Ray, 1965), suggesting that the genus Tamias has an ancestry in the Eastern US. Based on the bones, T. aristus was around 30% larger then the modern Eastern chipmunk. Try thinking about that next time you go to see one of those Alvin and the Chipmunks movies! The type specimen of this animal was discovered at Ladd’s Quarry, which is a Pleistocene site in Georgia (Ray, 1965). Pleistocene Ice-Age tapir, Dire wolf, and even peccary fossils have been found at this site. A variety reptiles and amphibians were also present (Holman, 1985). Like the giant beaver Castoroides, which also inhabited the East Coast during the Pleistocene Ice Age (Hulbert et. al., 2014), Tamias aristus represents a super-sized relative of a modern species. T. aristus may have led a slightly different lifestyle then its modern-day relative, but their overall skeletal similarities suggest that T. aristus occupied a similar niche. I heard John Alroy estimated Ladd’s Quarry at around 300,000 years old based on the presence of the Vero tapir, but I haven’t seen any publications with this information. We can conclude, however, that the environment represented at Ladd’s Quarry was from an interglacial period with higher temperatures then those of today. This conclusion is based on the presence of wetland animal remains, such as those of the Florida muskrat (Ray, 1967), at the site. A variety of animals are found at Ladd’s Quarry that also are observed in the forests of the East Coast today. The eastern cottontail, white-tailed deer, and opossum are just some of the creatures that left their remains behind at Ladd’s (Ray, 1967). Larger animals, such as the horse Equus (Ray, 1965) and the giant ground sloth Megalonyx (Ray, 1967) are also present and were the resident megafauna at Ladd’s Quarry during the interglacial period.

The environment which the noblest chipmunk called home was somewhat similar to this modern forest in Connecticut. Photo by the author, 2015. 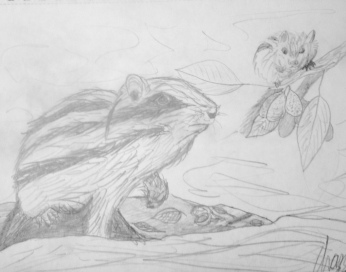 An Eastern Chipmunk foraging for Walnuts (Juglans sp.) stops to ponder at its larger relative, the noblest chipmunk Tamias aristus. Illustration by the author. Pencils on paper, 2015.

But this chipmunk’s reign as king of the forest floor was not to last. More extreme glacial intervals destroyed the noblest chipmunk’s habitat. The smaller, more adaptable Tamias species survived.

Forests gave way to grassland during glacial periods. If you’re an avid paleo-enthusiast, you might recognize that this photo is of Florissant Fossil Beds National Monument. Photo by the author, 2014.

During its heyday, Tamias aristus ruled the roost on the forest floors of Ice-Age Eastern US, its bones still preserving an ancient chipmunk legacy.