Dust swirls through the water as a school of Bothriolepis fish hustle their way through the busy stream. Bothriolepis are the bullies of these waters, shoving off other fish using their bulky bodies and stabbing those which do not give them right of way with their sharp front fins. Bothriolepis are like tanks, the armored carapace which adorns the front of their body making the armored fish sink to the bottom of stream bed.

These Bothriolepis belong to an ancient clade of fish called placoderms. Now, the group is extremely successful, but an extinction which soon shall exterminate a variety of creatures both flourishing in the seas and just colonizing land. Bothriolepis, though tyrannical in the way they treat the other fish of the stream, are little in this regard compared to their relatives in the open sea, wihch use giant body mouth plates to crush almost any prey animal they can find. Bothriolepis are also much more vulnerable than their cousins, as predators large enough to crush their protective armor still squeeze through the cramped waterways in which the placoderms live.

The school of Bothriolepis swim through these busy waters for a purpose. Its breeding season for these fish, and both males and females are anxious to breed and escape back into the gloom of deep lagoons that jut into the land from the seemingly infinite greenish blue sea. The Bothriolepis are taking a risk, as their only predators in these waters prefer the large lakes where the armored fish go to breed.

The school of armored fish arrives at their choice breeding spot. The Bothriolepis mate at the bottom of the lake, away from the watch of the wretched early tetrapods which line the banks to strike at sudden movement. These sluggish beats do well to wait on the banks, as they know bigger hunters occupy the water.

On the side of the lake, ripples stirred by a the shadow in the water set the tetrapods galloping into the woods. The shadow, almost six feet long, is long and slender in shape. The figure does not yet spook the armored placoderms, who go on mating. Suddenly, a pair of Bothriolepis are sent flying out of the water, and the head of a massive fish bites off the unarmored abdomen and tail of the male fish, sending blood flying in all directions. The female, in shock, escapes the teeth of this monstrous predator. The hunter is a rhizodont, a type of large lobe-finned fish. The skin of this beastly fish is littered with scars, showing the age and stoicism of the predator. The rest of the Bothriolepis flee, but the giant rhizodont is still able to obtain two more meals. Once the armored fish are all gone, the rhizodont paddles back into the gloom of the lake, waiting for the memory of the attack to be forgotten and for new victims to enter its domain.

Rhizodonts were giants among the Devonian fishes which pioneered the rivers and lakes of land. These fish are famous for their large size, with largest member of the group laying claim to the record of the largest known freshwater fish ever. However, some species included in the rhizodontida have evaded the interest of the public, including a species named Sauripterus taylori which swam through the lakes and rivers of the Northeastern United States over 300 million years ago.

Sauripterus taylori is known from a couple different specimens, all retrieved from the Catskill Formation of Pennsylvania. The Catskill Formation is a mostly terrestrial deposit, and was set down in the Late Devonian during a time known as the Famennian (Davis & Shubin, 2004). In the ecosystem the Catskill represents, Sauripterus would have swam alongside fish like the armored placoderm Bothriolepis (Stein, 2002). Along the shores of the lakes and rivers the rhizodonts inhabited, plants like Euphyllophytina would soak up sunlight (Stein, 2002). Remains of possible juvenile Sauripterus have also been unearthed from the famous Red Hill locality in Pennsylvania, where the large fishes would have coexisted with both tetrapods like Hynerpeton bassetti (Shubin, 2009) and the famously giant fish Hyneria lindae (Daeschler et. al., 2007).

The fossils known of Sauripterus taylori provide key information on the structure of rhizodontid fins. The original specimen consisted of fragments of the animal’s head, scales, vertebrae, and a well-preserved right pectoral fin (Broom, 1913). More recently, another well-preserved right pectoral fin has been described (Davis & Shubin, 2004), suggesting that the pectoral fins of Sauripterus were well-adapted for propelling the large fish through the water and pushing the animal from the bottom of the lakes and rivers in which it inhabited. The limbs of Sauripterus would have allowed it to be both gigantic and powerful, enabling it to hunt both swift and slow-moving armored prey within the waterways of Devonian Pennsylvania.

Broom, 1913 suggested the original right pectoral fin specimen of Sauripterus taylori to be nearly identical to the ancestral tetrapod limb morphology. However, it has recently been found that the similarities of the limbs of early tetrapods and rhizodonts are a case of independently evolved traits (Davis & Shubin, 2004).

Sauripterus would have been an incredible predator in life. Its large size combined with its agility would have made the fish quite an imposing predator. Like in other rhizodonts, fangs and large tusks would have peeked from the front of the jaws of Sauripterus, sinking into the flesh of fish like fishing hooks. A powerful bite would have aided the large lobe-finned fish in attacking prey. Though we known little about this ancient predator, further excavations at sites like Red Hill may result in the discovery of better specimens, revealing a hunter long forgotten among the Devonian rocks of the Eastern United States. 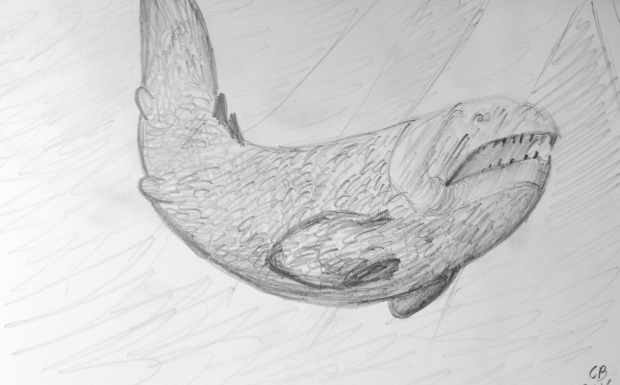 Sauripterus taylori by the author. Pencils on paper, 2016.

Happy Earth Day! To read the last Antediluvian Beasts of the East installment, click the link below: