EDIT: I’ve added a link to my preprint on the Maryland theropod remains published this past summer. I’ve focused in a little more on some stuff now but I think it gives a good overview of what I’m focused on.

What a weekend this has been! I’ve finally been able to submit a big biogeography paper I’ve been working on for a while (started writing it last spring) and I have also managed to resubmit another revised manuscript. Sorry I haven’t been posting anything recently, but this year has been rather hectic in terms of research and traveling. Here’s a quick peak into what I’ve been up to.

Some highlights since I last blogged:

In August, I traveled to Dinosaur Ridge, located just outside the Colorado capital of Denver, to view the awe-inspiring trackways which line the sides of an old road which is now used as a bike trail. The large ornithopod tracks (which were mentioned to possibly made by the hadrosauroid Eolambia) and ornithomimosaur tracks were quite stunning. To my pleasant surprise, they also had a site from the Morrison Formation which held oh-so-pretty mahogany colored bones. The views of the red Morrison Formation rocks were absolutely stunning. Those rocks are of the same layer as those which cradle the famous Red Rocks Amphitheater.

The small museum at the Dinosaur Ridge main building was also a nice addition to the day. The people at Dinosaur Ridge have done a very good job of telling a story about the site in the context of the changing geography of North America during the Jurassic and Cretaceous. I especially admired their use of paleogeographic maps with displays on each period of time represented at Dinosaur Ridge in order to really give a greater perspective on the fossils. The displays also excelled at what I find some museums often do not. They gave not only a picture of the dinosaurs and other “cool” animals which lived at Dinosaur Ridge during each period in time, but also gave a picture of the entire environment. The murals by Michael Skrepnick were also lovely, and a life-size outdated Utahraptor sculpture was an amusing addition to the portion of the museum within the building.

Outside, a well-made life-sized Eolambia sculpture shadowed another little display of some Allosaurus bones. All in all, the museum was very good and I definitely recommend checking it out along with viewing the famous trackway.

Here are a few pictures of the museum, the main trackway on the ridge, and the views from Dinosaur Ridge.

A friendly brachiosaur greets incoming visitors, while a rather murderous-looking Utahraptor peeks at new arrivals to the museum. Check out those cervicals. Eat your heart out, SV-POW! 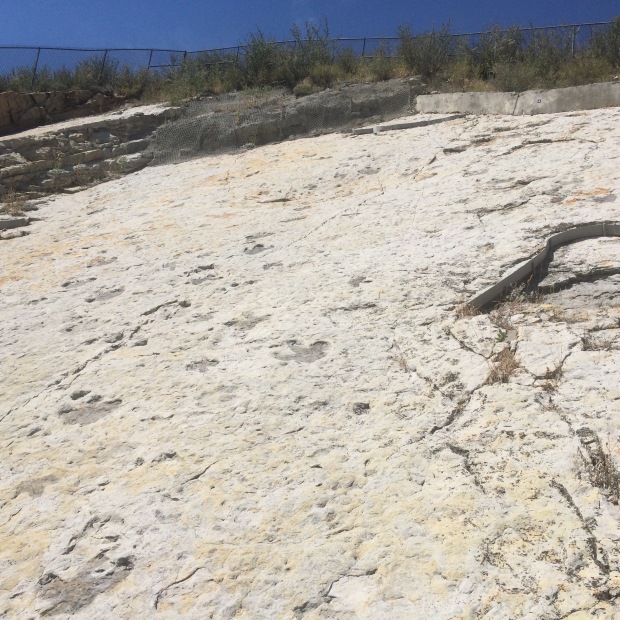 A closer view of the purported Eolambia tracks. The smaller tracks indicate a juvenile ornithopod walking alongside an adult.

View from the ridge.

On September 18th, I had the honor of presenting some of my research on the paleobiogeography and paleoecology of Appalachian dinosaurs at a meeting for the New York Paleontological Society (NYPS). I heard a number of great talks during the meeting, including one on trilobites from the northeast and another on the formation of arches in rock.

The talk centered around research I’ve been doing for the paper I mentioned above which is centered on comparing dinosaur faunas from Appalachia with other faunas across the globe.

In October, I ventured to the AMNH to view some interesting theropod material from the Cretaceous of New Jersey. I don’t want to give too much away, but I hope to start writing a paper on the specimens I viewed pretty soon. Thank you to Carl Mehling for hosting me!

The weekend before thanksgiving, I was able to travel to Maryland to view some theropod material within the Dinosaur Park collections. The farmland and countryside around the Dinosaur Park site was very pretty. I’ve added a picture below of some of the farmland, which was a very nice treat before a long day of driving.

Thanks to Ben at Extinct Monsters for hosting me and showing me the collections. The preprint from this past summer can be found here.

I hope I’ll have some more time to blog soon, and thanks for bearing with me until now. I have a couple of ideas for what species I will feature for the next Antediluvian Beasts, so I’ll hopefully be able to write up an article. Happy Thanksgiving and thanks for reading!