Hi everyone! This will be a short post, but one regarding an interesting sighting I had while having lunch at a local diner today. The diner, known aptly as the Lakeside Diner (info), sits on a lake that is frequented by many bird species. Besides the common grackle, blue jay, and house sparrows I saw today, a denizen of the water made an appearance. As a brown rat was getting ready to head back into the lake, a large beak made a splash as it grabbed the poor rodent and dragged it into the abyss. It was none other than the maw of a common snapping turtle, Chelydra serpentina.

This turtle, covered in knobs and scales, was around three or so feet in length. It was quite the cryptodiran. As it plunged back into the murky water, I was able to get some photos of its rugged back and tail. Here they are:

It goes to show that even in the suburban setting of Stamford, Connecticut, truly incredible species may be found.

Hello and welcome to this shorter edition of PaleoNews. This spring, a few finds related to the landmass of Appalachia have been published on, and so here’s a look back at those.

Though the find was published on by the media this past summer (e.g., here), the first-ever record of a ceratopsid dinosaur from Appalachia has been published on in the journal PeerJ. In the paper “The first reported ceratopsid dinosaur from eastern North America (Owl Creek Formation, Upper Cretaceous, Mississippi, USA)” (Farke and Phillips, 2017), the discovery of a single tooth from the Maastrichtian Owl Creek Formation is discussed in the context of the biogeography of horned dinosaurs in North America during the Cretaceous. The paper also discusses the Maastrichtian-age deposit that is the Owl Creek Formation and its fauna in some detail, as well as giving a brief overview of the dinosaur clades which inhabited the landmass of Appalachia (Farke and Phillips, 2017).

In the paper, the authors conclude that a dispersal event of ceratopsid dinosaurs occurred in North America as the Western Interior Seaway retreated during the Maastrichtian, the last stage of the Cretaceous period (Farke and Phillips, 2017). Thus, the tooth is both significant for being the first report of a ceratopsid dinosaur from eastern North America as well as for suggesting a possible dispersal event during the Maastrichtian.

The MS find belonged to the ceratopsidae, as did Triceratops horridus (skull pictured above).

I also had an article published on ornithomimosaur remains from the Arundel Clay of Maryland (Brownstein, 2017). The finds I describe are important for representing two distinct morphotypes (and thus possibly two distinct species) of ornithomimosaur that existed in the Arundel ecosystem. These dinosaurs would have coexisted with the titanosauriform sauropod Astrodon, the dromaeosaur Deinonychus, the carcharodontosaur Acrocanthosaurus, possibly the ornithopod Tenontosaurus, an indeterminate neoceratopsian, and the obscure nodosaurid Priconodon (e.g. Weishampel, 2006). There is certainly much more material to be published on from the Arundel Clay, so it should be exciting to see how the Arundel’s dinosaurs come to light.

Two of the pedal unguals representing one of the morphotypes of ornithomimosaur present in the Arundel.

Today, I feature the skull of the Aurochs (Bos primigenius), an extinct species of large bovine that inhabited the wilds of Europe, northern Africa, and Asia during the Pleistocene and into the Holocene. Julius Caesar, in book 6 of his Commentarii de Bello Gallico, writes on the fantastic size and power of these animals (Commentarii de Bello Gallico 6.28). I highly recommend you read his description, either in translation or the original latin, if you haven’t already, as it gives a seldom-attained glimpse of an extinct animal of a great awe-inspiring nature. 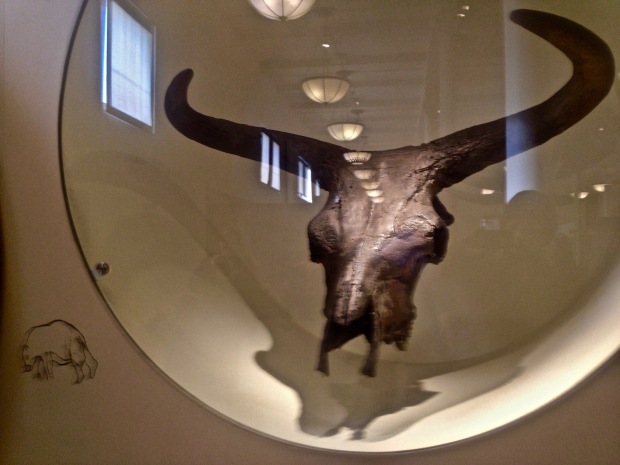 Overall, this has been a productive spring for Appalachian discoveries. Let’s hope for an even better summer! Thanks for reading.