Hello everyone! I’m sorry I haven’t posted for a while, but I’ve been researching away on some exciting new discoveries! I do, however, want to share some of the recent highlights of my work.

A giant tyrannosaur from the Cenomanian

In March, my manuscript on a huge partial theropod metatarsal from ~95 million-year-old sediments in New Jersey was published in the Bulletin of the Yale Peabody Museum of Natural History (Brownstein, 2018a). Although the find is admittedly very fragmentary, it shares many features with the metatarsals of intermediate-grade tyrannosaurs like Appalachiosaurus and clades out nearby that taxon in a phylogeny of Tyrannosauroidea. The fossil is the first bone of a tyrannosaur reported from the Potomac Formation and the oldest known eastern North American occurrence of the clade.

Even more interestingly, the fossil shows tyrannosaurid-line tyrannosaurs had already achieved sizes of 6 or more meters during the Cenomanian, contrary to research on geologically younger Asian representatives of the group which has suggested a later date for the development of gigantism (e.g., Brusatte et al. 2016). 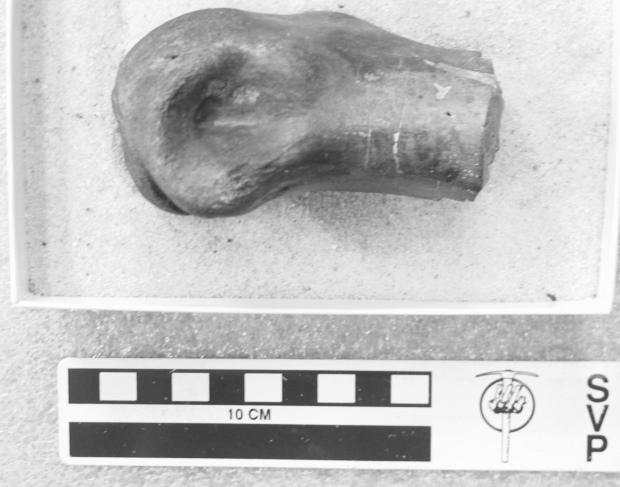 The Potomac tyrannosaur. Photo by the author, 2017.

The large dromaeosaurs of North Carolina

I also published on a large theropod tooth from the little known Clifton Farm site (Brownstein, 2018b), which also produced a possible ceratopsian maxilla described by Longrich (2016). A look at the morphology of the denticles of the tooth and inclusion of the specimen in a couple principle components analyses allow for its identification as the crown of a large dromaeosaurid, perhaps one slightly larger than Deinonychus. Here’s the catch: the tooth is from the Campanian, when very few mid-sized dromaeosaurids are known. Furthermore, the tooth is unlike any dromaeosaurid crown previously described from the southeastern US, suggesting there’s evidence for the existence of at least two species in the Campanian of southern Appalachia.

The most publicized of my recent papers came out in early June (Brownstein, 2018c). In it, I described two interesting theropod dinosaur limb bones from New Jersey in the collections of the Yale Peabody Museum. One had a number of pits (probably made by crocodyliforms) that caught my eye upon initially seeing the bone in a drawer with other eastern North American dinosaur bones. In addition, the bone seems to show evidence of invertebrate activity on its surface. A closer look at a partial ornithomimosaur femur revealed scores likely made by sharks. Both bones demonstrate the complex ecological interactions that were happening off the coast of eastern North America during the seven million years or so before the K-Pg extinction.

A large dromaeosaurid tooth from Ellisdale. Photo by the author, 2017.

I’m very excited to share that just today my paper on theropod dinosaur material from the Ellisdale site was published in the Journal of Paleontology. Although this highly fossiliferous locality was first discovered in 1980, no comprehensive description of any dinosaur material collected from it has previously been published. I identified the presence of several theropod clades on the basis of teeth and isolated limb material. Teeth at the site are referable to a number of different animals, including a very large dromaeosaurid, a smaller maniraptoran, and tyrannosauroids similar to Dryptosaurus and Appalachiosaurus. You can read the full paper, which was kindly made freely open-access by the journal, here.

Today, I also finished making the final touches on my new website (chasebrownstein.wordpress.com). Here you can view my publications, summaries of my research projects, and notes on other science-related things I’ve been up to.

Overall, it’s been a productive, exciting spring and summer. As the academic year comes on the horizon, I’ll try to start blogging more again. Some very exciting projects are in the works, so please watch this space!

Brownstein, C.D. 2018. The distinctive theropod assemblage of the Ellisdale site of New Jersey and its implications for North American dinosaur ecology and evolution during the Cretaceous. Journal of Paleontology 92(5): in press.